It was a busy holiday season, no doubt! I don’t know if I will cover everything or not…

Ocotober was crazy, though.

Way back in October, before my last update even, I picked up a VibraPrime, an interesting device intended to help one spend less time filling primer tubes. As described, “The Vibra-Prime can load 100 primers into a primer tube in a matter of seconds with its unique motorized agitation mechanism.” For *that step* of the process, actually stacking primers in a tube, it works as advertised. However, in my experience with it, the entire process from a box of primers to a tube ready to load into the press, the VibraPrime is a fussy process with too many steps.

The VibraPrime tray is much like a standard flip tray. It is sized so that most primer packages will fit over it so that when you load it, you can shake it to flip any errant primers to the proper orientation, anvil side up. You then put slide the tray into the pistol gripped motorized vibrating thingy and attach what I am calling the intermediate tube to the bottom of the vibration unit. Now you activate the vibration unit by holding the trigger and tilt the unit to guide the bouncing primers to the mouth of the tube. You can optimize the angle and technique with just a little practice. This part of the process is indeed quick, 10 to 20 seconds at most. Then you remove the cap of usual primer pickup tube, mate it with the adapting sleeve on the intermediate tube, pull the wire pin and drop all 100 primers into the pickup tube. Replace the cap and you have a filled tube. With practice, you get the the whole process down to about 90 seconds

Use a standard primer flip tray to right the primers, place the cover over them, invert, remove the tray and pick up 100 individual primers directly into the pickup tube in about the same amount of time, maybe less. No batteries, no intermediary tools, more free brain cycles to use to think about the analytical algebraic topology of locally Euclidean metrization of an infinitely differentiable Riemannian manifold.

Where I think it could help is scaling. If you have a dozen tubes to fill, you could probably do them faster than by manual means. For me, however, I don’t think I gain much from the machine.

I already had some nice bright LED lighting on my press. The Inline Fabriction light mounts in the center hole of the tool head, shining directly down on the shell plate. This was a tremendous improvement over my clamp light, which provides a lot of light itself. 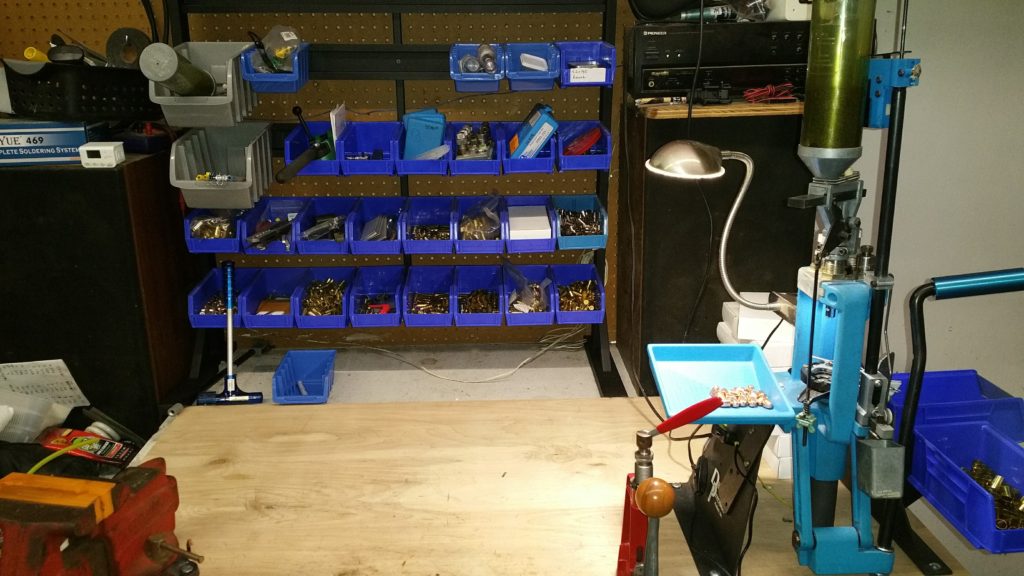 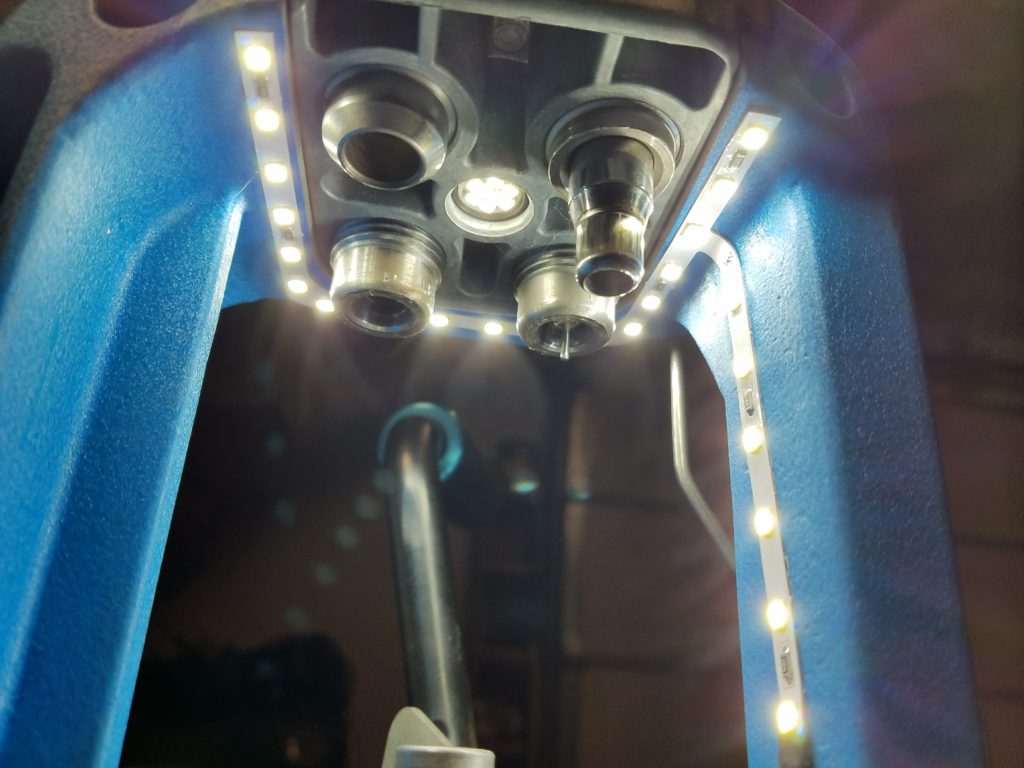 From this angle, it looks like I’m about to be vaporized in the evil scientist’s invention.

Note that the Inline Fabrication light is still there. More light is always better.

The UFO light, besides just throwing more lumens, also has a bit that goes down the front of the frame, on the right side in the pic above. This lights up the primer slide, which is normally in the shadow of the shell plate. 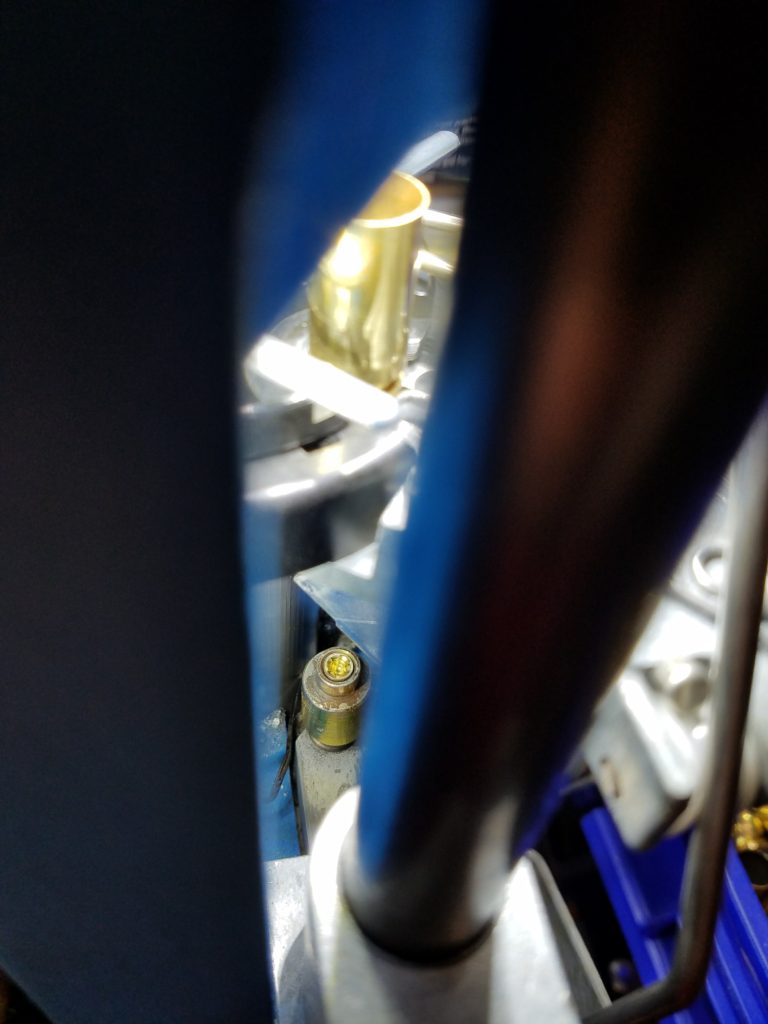 In mid-October came the Lone Star IDPA Championship, which was my first staff experience in a major match. In spite of being pretty much fully into the throws of seasonal allergy trigger asthma, I had a lot of fun and learned a lot about what it takes to put on a big match. I knew there was a lot to it, but some of the specific details were enlightening. I really enjoyed getting to see almost every single competitor shoot, other than the staff members that were on other squads on staff day.

As for my match performance, I have definitely done worse, 95th overall (which doesn’t really mean anything), 14th in my class and division and somewhere in the mid-20’s & 30’s for any given stage. I had 11 down on one stage, single digits on all others and no procedural errors at all.

Nothing much for me on the prize table, just some hot pink magazine basepad markers that I put on the the G19 mags. 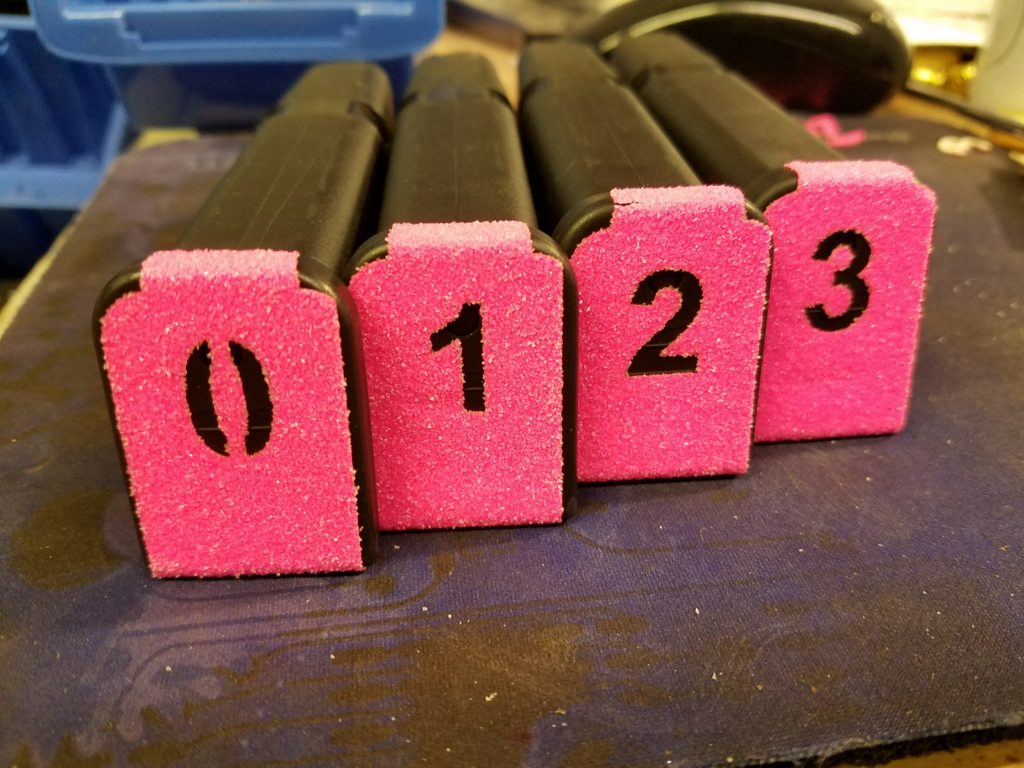 October also marked the last match held at the financially troubled Total Shooting Sports. It was a nice venue and the Monday night matches we had there are missed and have not yet been replaced.

When I got my FX9, did a quick and dirty sight-in and actually shot a couple of indoor carbine matches with it, but it was not really on at all. Miss enough heads or hit a few non-threats and you’ll want to spend the little while it takes to sight it in. I eventually got a handle on it. 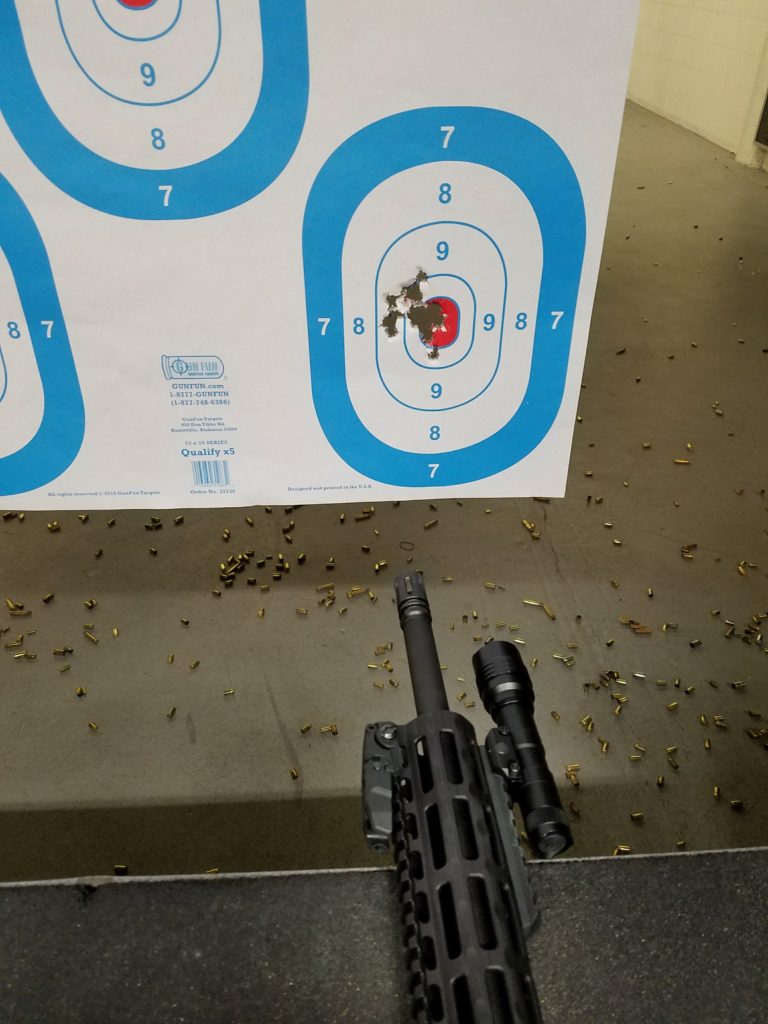 One of my coworkers lost his Dad. As part of the resolution of the estate, the family sold all the belongings in his house and the house itself. He had been an avid sportsman and woodworker, so there was deep sea fishing gear, firearms and a shop full of tools and supplies. The guns went pretty quick, but I did get a very nice Remington 700 BDL in 6mm Remington, my first bolt action rifle ever. At this writing, I have yet to fire it… 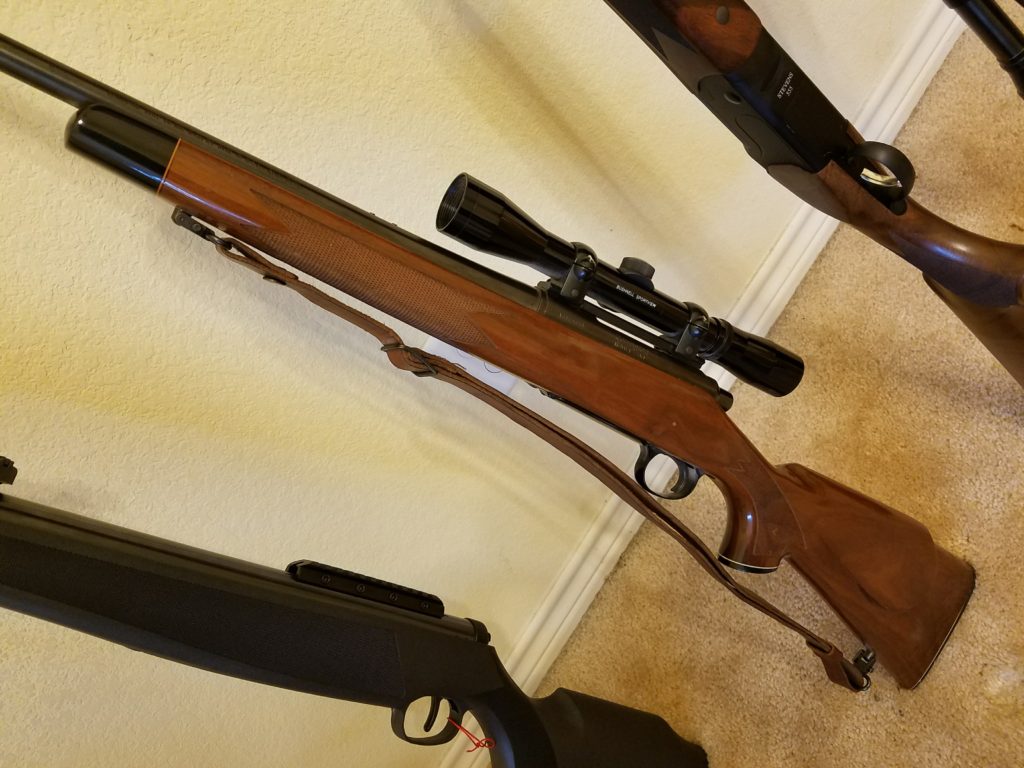 You may recall that I shot my chronograph some time back. It was really only cosmetic damage, but I secured a replacement case for it. There is not much to the inside of one of those… 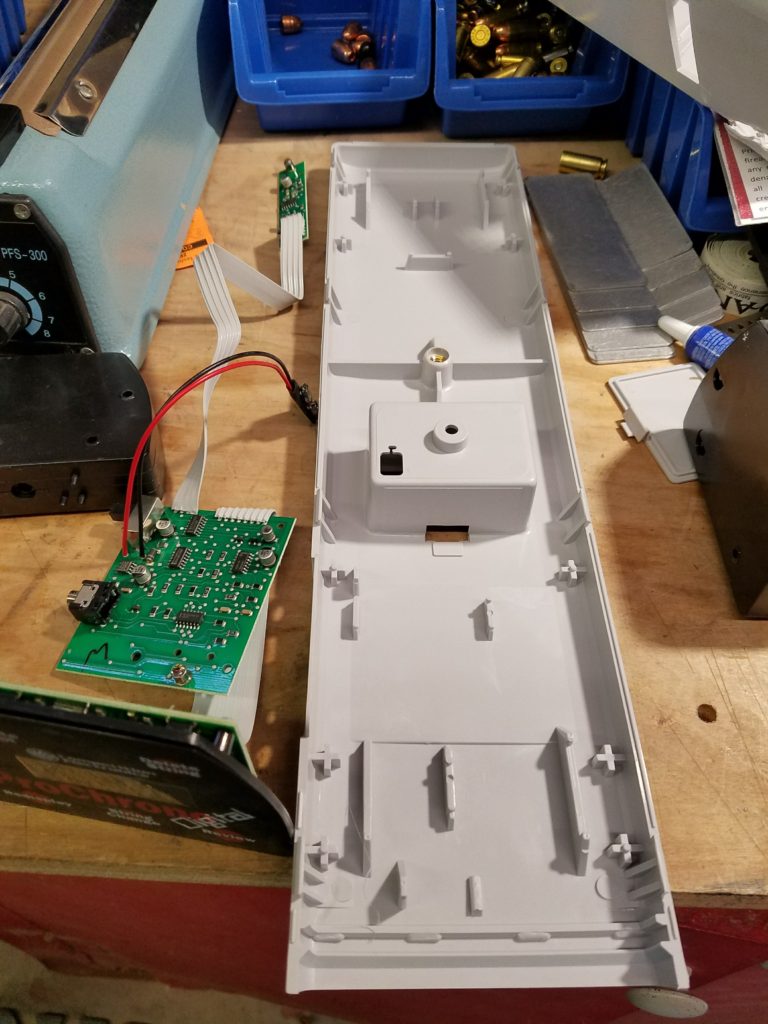