I do not intentionally update this blog quarterly, but that does appear to be how it turns out!

In mid-April, I cut a deal on a CZ Shadow SP-01 from a fellow Cross Timbers guy. He had already installed all the Pro Package parts that Cajun Gunworks offers and included all the original parts, a CompTac holster and mag pouches and a stack of magazines. It was simply too nice to pass up. 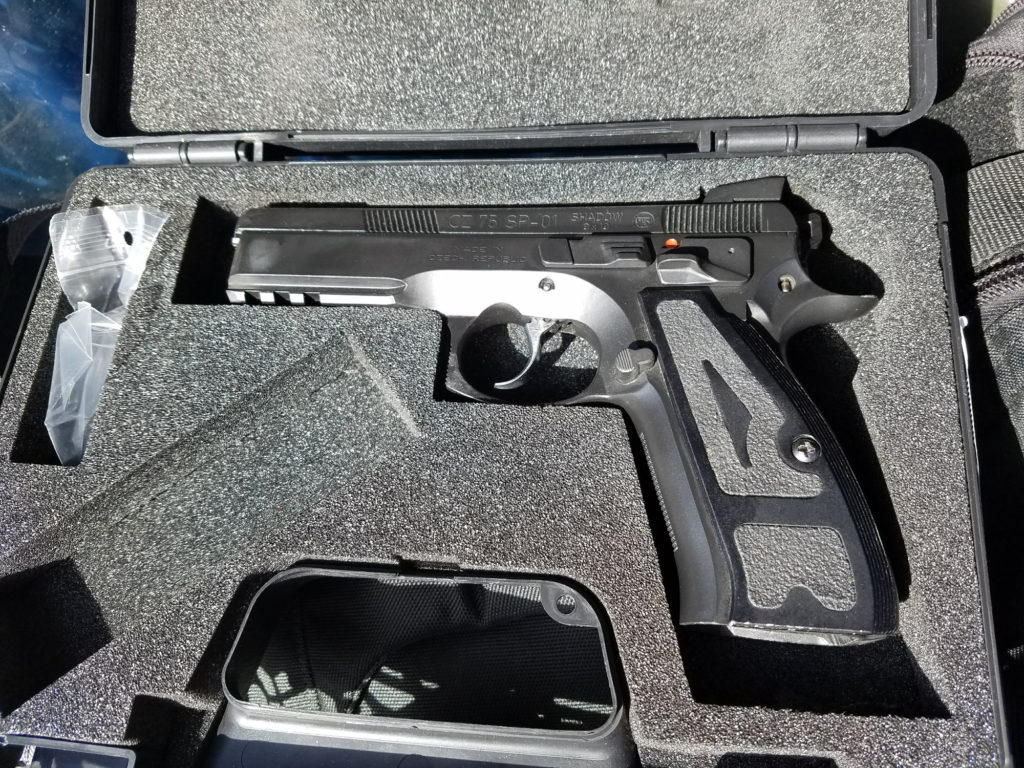 It seems to work ok… 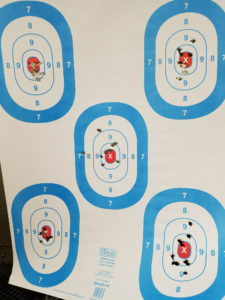 Although I had that nice new (to me) CZ with an incredible trigger, I didn’t want to recalibrate my brain thing for another pistol so close to Texas State.

In any case, the theme of the match was scenes from Lethal Weapon. I was CSO for stage 4: 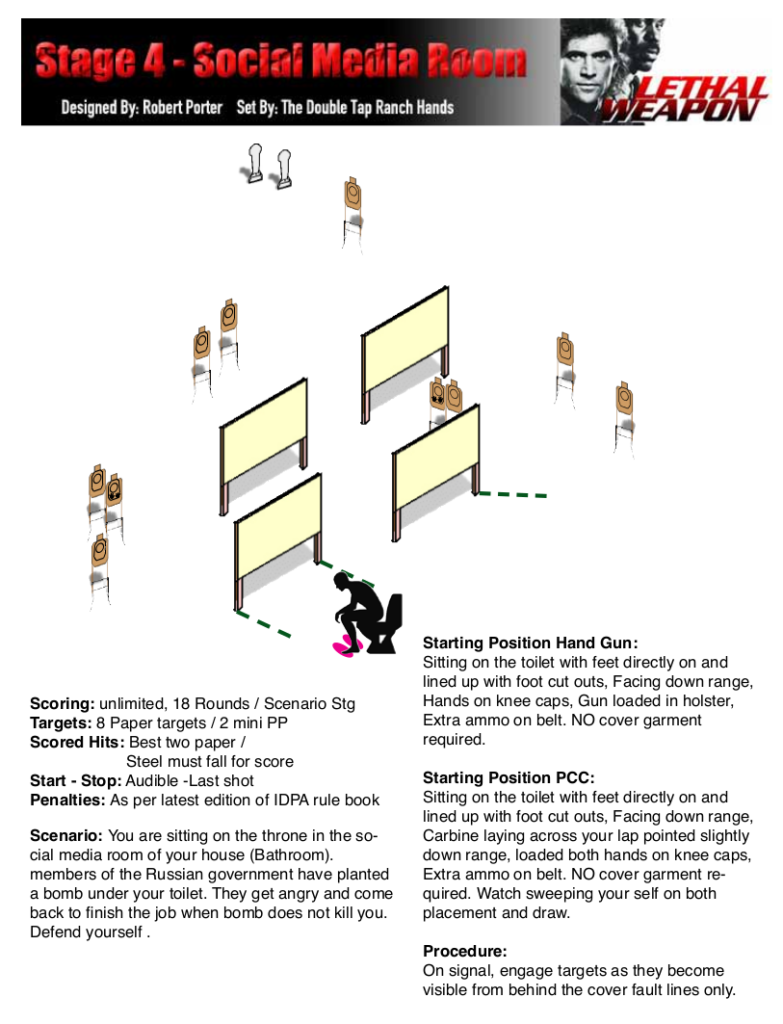 While all the scenarios were taken from the movies, I think this stage with this prop was the one that was instantly recognized without a stage description. It was not particularly tricky to shoot, but the scenario was ripe for lots of restroom humor. Too late in the day, I realized I should have had some little prize to award contestants for the hidden category of best toilet joke. An opportunity missed…

On staff day, I shot reasonably well. I placed (without award) 4th in my division and class. While I did not win any shooting awards, I did win a pretty valuable drawing prize, a CED chronograph. 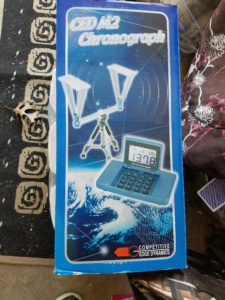 Now, I have a chrono that I have been plenty happy with. I tried out the new one and found that it has some very nice features in the controller, such as calculating power factor, gobs of string memory, the ability to clock extremely slow projectiles. On the other hand, it is physically larger and substantially more complex to deploy, requiring the sensors to be clamped on to the mounting bracket and wires run to the controller. The unit generally and the screens specifically are much larger and catch more wind. Alternatively, my ProChrono is a one piece affair. Put it on the tripod, turn it on and go. If it is overcast, you don’t even have to use the screens. (actually, that’s true of most chronographs).

The CED would lend itself well to a permanent or semi-permanent installation. I have not connected it to the my laptop with the supplied USB cable, and obviously have not used the PC software. There may be features that would influence my opinion overall, but I would summarize by saying the CED M2 has features I don’t really need in a package that is unhandily large. I’ll probably trade it for something 🙂

The TX State match was the last in which I used my Glock, preferring at this point the CZ. The CZ is treating me fairly well, too. The only thing I have done to it is change the grips. The ones on it looked great and they were large enough for my hands, but a little slick. I put on some VZ G10 grips with some very aggressive texture. 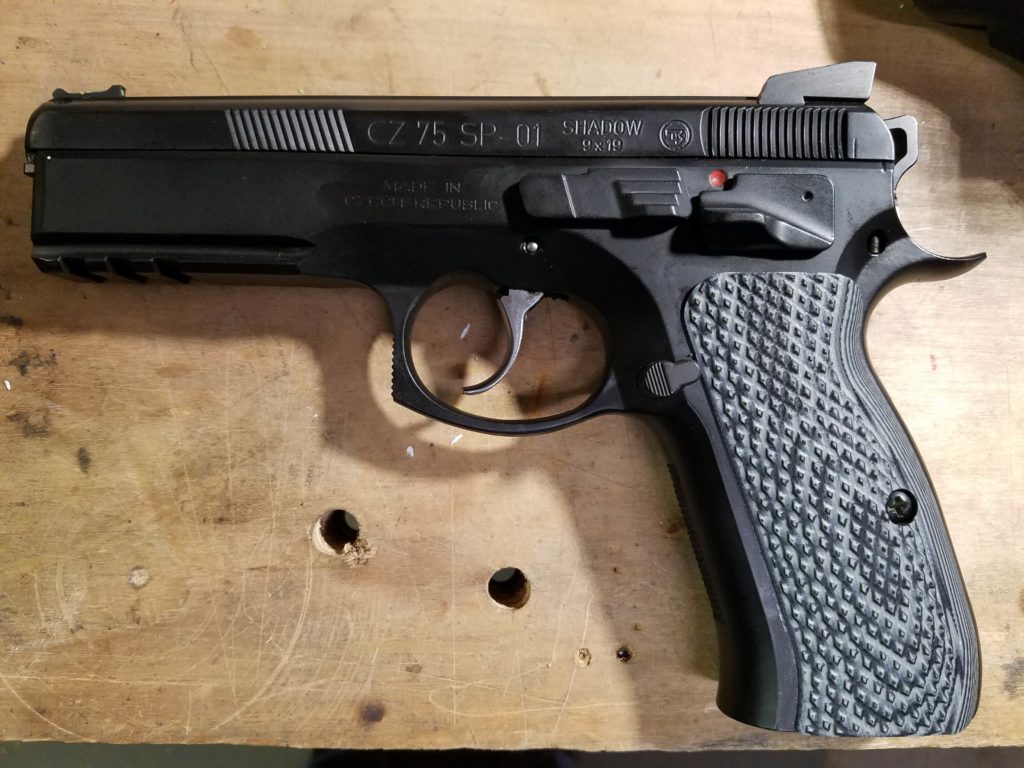 This whole thing is a pretty big swing in standard procedures, not the least of which is that I am now loading mostly 9mm instead of 40 S&W. I have coordinated with fellow CZ shooters to load ballistically similar ammo so that we can serve as backup for one another, floating all boats kinda stuff. I am loading 135g Cimarron bullets running just under 1000 FPS.

I have been working out my hands, particularly the left, to produce a more solid grip. I got a set of simple rubber exercisers, ranging from 30 to 80 pounds. I keep one on my desk at work, one in my car and a couple at home. The one in the car gets the most use, as my drive to and from work is about an hour each way. 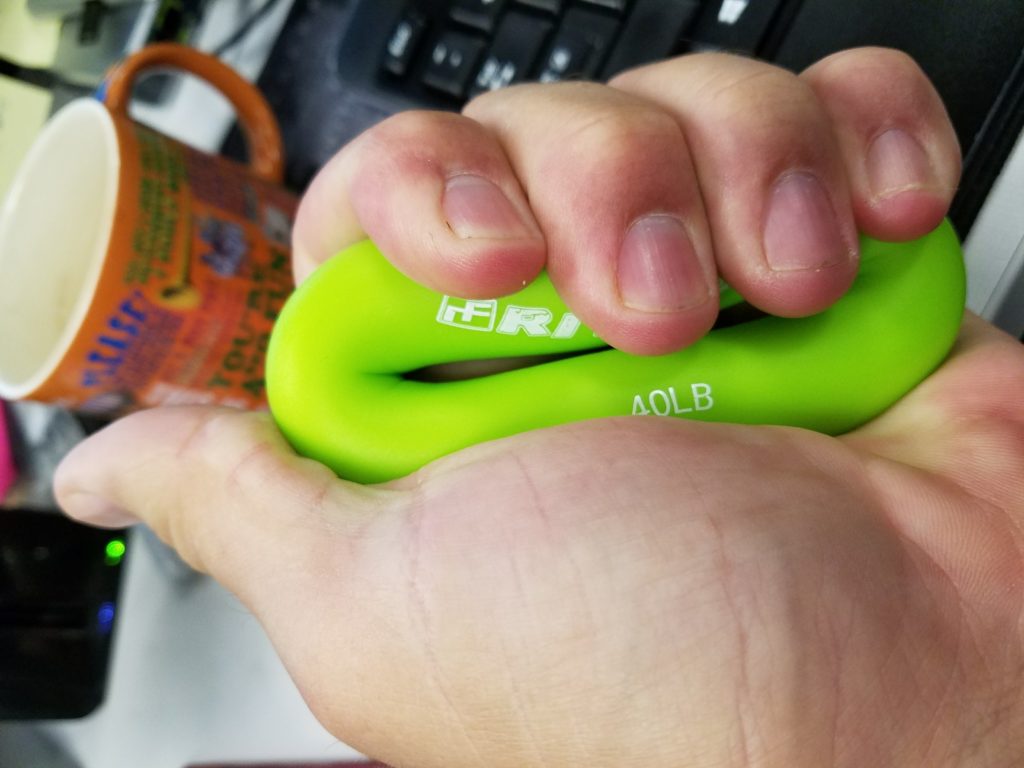 I signed up to work my first USPSA major match, the 2018 Cowtown Classic. I also had my first major match DQ. I managed to have an AD during my first mag change on my first stage. Ouch. Pistol was level and pointed downrange. Obviously, my trigger finger was not in the right place, but the much lighter trigger on the CZ may have revealed that more readily than the old Glock might have. At least I got it out of the way early. I had a total match time of about 12 seconds, but the mikes sure added up. 🙂

I spent the rest of staff day taping, occasionally running the scorepad and deflecting apologies when someone would ask me how I had shot any particular stage 🙂 For match day, I was the full time scorekeeper on our stage.

In what was sort of an impulse purchase, I picked up a MantisX training device. Basically, its a Bluetooth equipped accelerometer that mounts on a Picatinny rail. I say impulse purchase because I had been interested for some time and while perusing the match book for the Gulf Coast Championship, I saw that they were a sponsor and I decided to pull the trigger, so to speak.

It is an interesting device. You mount it, start the app on your phone (which requires setting up an account with them) and connect to it via Bluetooth. It “listens” for a hammer fall and reports on how much your point of aim wanders for 200 milliseconds or so either side of the hammer. 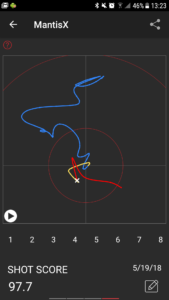 The blue trace is aiming time, yellow is during your (estimated) trigger pull time and red is after the hammer falls. As you can see, it is very sensitive to movement. That trace looks like I was waving the pistol around like a madman, but the exercise scored a 97.7 out of 100.

It has several training exercises for you to work through. One of them includes an analysis of possible causes for the biggest issue during that particular exercise. 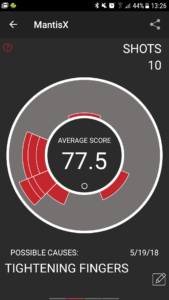 My biggest complaint is that with the 400 or so millisecond window on either side of the hammer fall, it is not suited to analyzing movement for rapid followup shots or split timing or any of those sorts of competitive data. Even so, I think it has helped me, particularly pulling through a double action trigger.

Speaking of Gulf Coast Championship, it was hot, especially on Friday. A few of us who were squading together went to see the stages Friday afternoon. The actual temperature wasn’t so terrible, numerically, but it was death by drowning to breathe the floating liquid that passes for air down there.

Match day was a little better due to mostly cloudy conditions that kept the sun at bay. They were challenging stages and a lot of fun. I was 9th in my division and class, which perhaps obviously got no award, but 7th, 8th and 9th were within a 4 second window.

Leaving the site at the end of the day, I didn’t notice that the powered gate had begun to close and I managed to get a little scrape from it. It definitely could have been worse! It mostly buffed out. 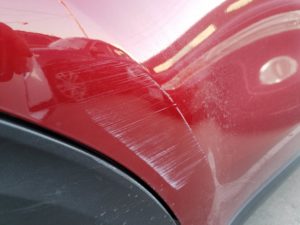 I have wanted a night vision scope of some kind for quite a while. I found an ATN X-Sight II for a decent price. Long term, I think I will put it on my pellet rifle as a tool to address small nocturnal varmints, but for learning about it, I put it on my Ruger 10/22. 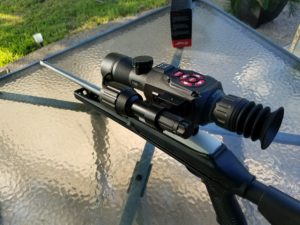 I sighted it in in daylight conditions, mostly to learn about the copious menus it has. A couple of the cooler features are that you can store various profiles that make it easier to move it between weapons, but also so you can store multiple profiles for each weapon. You might have a profile for one rifle sighted in at 25 yards and the same rifle sighted in at 100 yards. Just pick the profile from the menu and aim accordingly.

It also has some rangefinding capabilities, based on stored height information about certain targets. For example, it includes a profile for a deer that assumes 5.9 feet from hooves to tips of antlers. In rangefinding mode (which is not a particularly quick process), it tells you to hold a line and the bottom of the target then at the top of the target. It calculates the range based on the tilt difference between the two.

I’m looking forward to trying it out in real conditions sometime.

These days, I generally load Cimmaron bullets in 9mm, but I am not exclusive to one brand. Before Cimmaron, I’ve had great results with Xtreme Bullets. One of my friends prefers to load only Xtreme bullets, so when he won a gift certificate for $50 worth of Blue Bullets, we worked a trade and I ordered 1000 135g Blue Bullets in 9mm.

Like most bullets, they look really good in nickel cases. 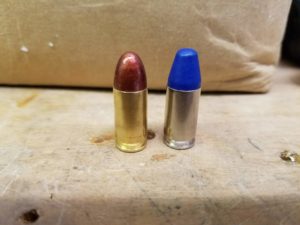 We had a fun outdoor two gun match at the end of June. I shot the AR and loaned my PCC to friends. We had a great time! One stage had a revolver pick-up gun that had to be loaded on the clock. It also unfortunately spent most of it’s time in the sun, so it was literally hot as a pistol.

Our July 4th match was not canceled. For two of the stages, we had a full auto MP5 for a pickup gun :). For the first stage, there were three targets in the middle that you were exposed to immediately, one at a shooting position to the left and two at a shooting position to the right. We had a full 25 round magazine and several options for engaging with it. The first three targets required 5 each. The more competitive ones chose to go single action for most of the targets until the mag ran out, then the rest with their pistol. The more adventurous used careful trigger control to fire controlled bursts in basically the same way. Most people did not really blast away with the MP5, which was unfortunate.

I chose a hybrid approach, 15 single shots on the first three targets, switch from single to full, dump the rest of the 10 rounds on the left target, then use my pistol for the rest. I was pleased with my grouping for the 10 rounds, with 6 in the zero zone. It was actually better than the single shots in the middle targets.

Finally, I have wanted to build an adapter for my force gauge to allow me to measure trigger pull. It turned out to be reasonably easy. I found a heavy wire hook, kind of a pegboard type of thing, but not quite. The part I needed was a nice square 90 degree bend on one end and I cut other end off. I threaded the long end with 5mm x 0.8 pitch and secured a coupling nut with LocTite. The hardest part was fitting it to the force gauge. I wanted the hook pointing level and to the left, making it easier to operate, at least for a right handed operator.

It works really well. To use, hold it level, zero the meter, hook the trigger, then slowly pull. I found putting the meter in peak mode make it much easier to catch the actual reading.

The CZ in double action and single action. 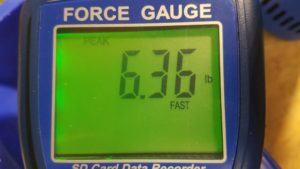 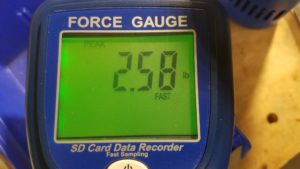 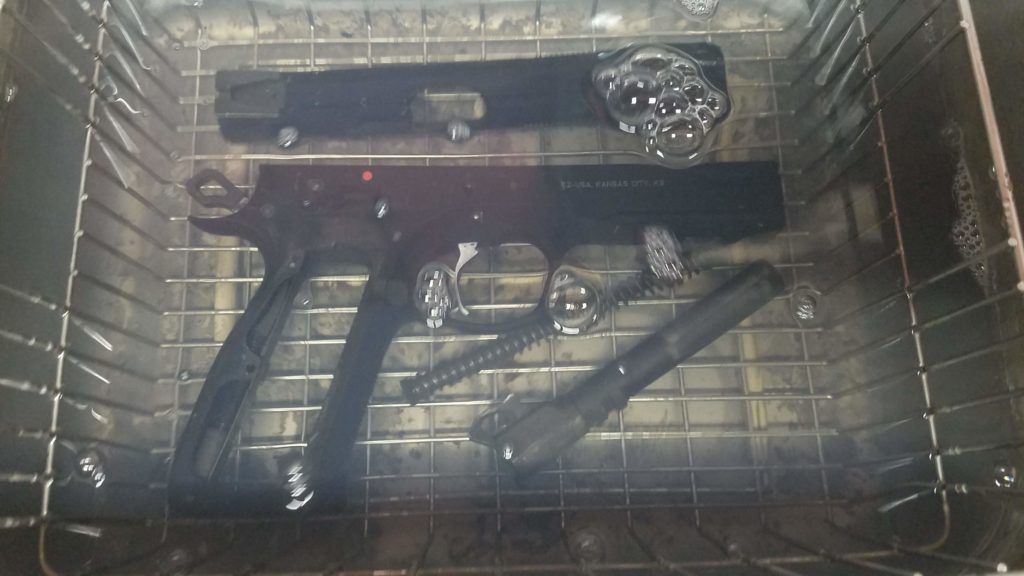 Clean and lubed, ready to go… 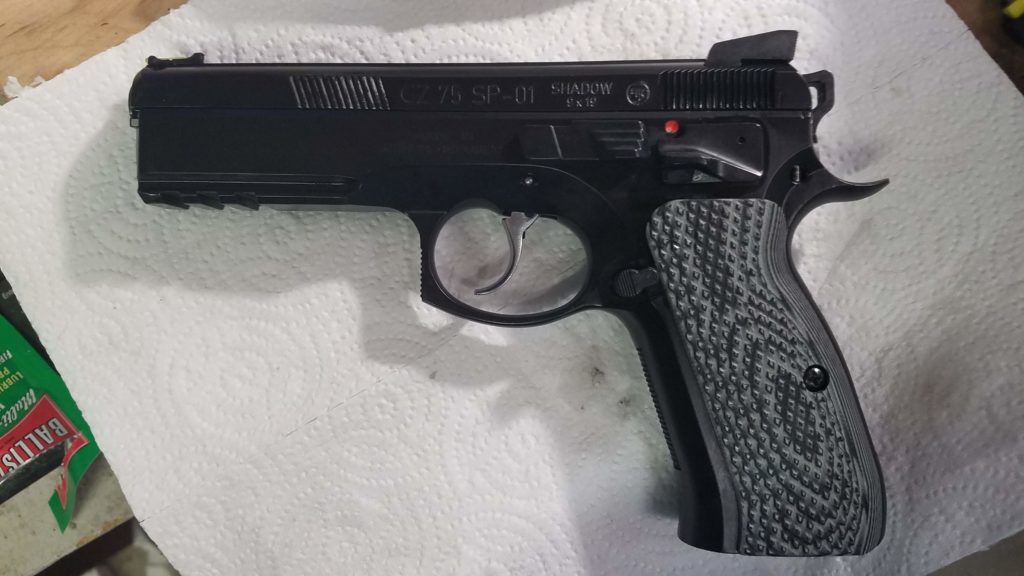