All the good things converged on the calendar, so Christmas Day afforded me a few hours of the magic combination of daylight, reasonable warmth and free time. I used that to do a little back yard shooting.

Besides just an opportunity to shoot, I had a few specific goals. Set up and learn the details of the chronograph, test the 1911 after the work I’ve done and test fire the Lone Wolf 40S&W conversion barrel in my Glock 20. Since I was shooting anyway, I also took my 10/22 to tweak the scope. 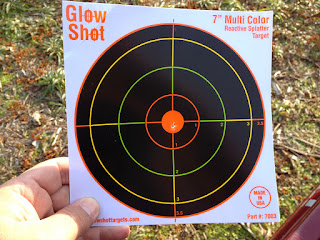 The 1911 seems to work flawlessly, at least 50 rounds worth.

I have a Chrony Beta Master. The user interface is not particularly friendly, but then it’s just a few digits of 7 segment LCD with three buttons for all functions. After using it a bit, I get it, mostly anyway. But a cheatsheet is in order because I had to refer back to the manual several times. I dont want velocity testing to get mired down in chronograph procedure, especially when shooting by the hour at the range.

The sun was heading for the horizon and once it got a kinda low, the chrono had difficulty catching every shot. It is well known that lighting is pretty critical. Afterall, it is trying to see a gumball flying by at 130 miles per hour. I have some lighted diffusers (a new product from Chrony), but yesterday’s goal was to just work with the unit a bit.

Which brings me to the bad news…

The Lone Wolf barrel seems to be fine, but I didn’t have any factory ammo to try it with. Turns out that my 40 S&W reloads had troubles feeding. Actually, they have trouble going into battery.

Glock pistols, especially early generations, are notoriously hard on 40S&W brass. For the relatively short wide cartridge to feed properly, the ramp on the barrel needs to be longer, which leaves some of the case head unsupported. This makes the brass bulge a little more. Some people are completely opposed to reusing 40 brass at all because of some fairly spectacular case failures. The issue, however, is largely addressed with newer generation barrels and with aftermarket barrels.

I have a Lee Pro1000 press, running with Lee full length resizing dies. Even so, the sizing die doesn’t seem to reach all the way down the case.

You can just see the “belt” they sizing die leaves: 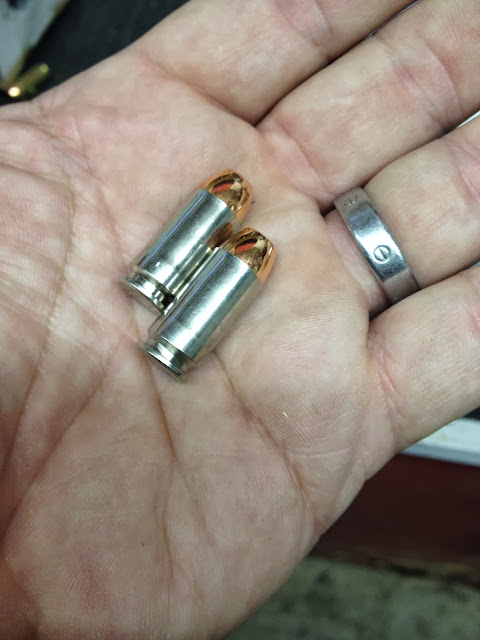 However, I have a box of the ill fitting ammo with me today as I write this. I am using the LoneWolf barrel as a go-gauge and I have discovered that the issue look more likely to insufficient crimping.

In fact, in the picture above, you might be able to see a little of the expander bell on the case mouth.

So….  I have an gauge block on the way, which should make it easier to catch this kind of issue in the future. I really should have caught it on my own before I loaded up nearly 1800 rounds. My bad…

The Lone Wolf barrel manually cycles Remington factory ammo just fine, so I am looking forward to my local action shooting club match. Tonight, we are having our 4th Thursday match, which is usually something fun. Tonight, “… stages will be fast and close. Front sights optional. Bring the pistol you most like to hose ’em with!”

Here’s to a jam free evening!