Back on November 21, I shot in my first IDPA match. Weather, holidays and personal schedule issues colluded to prevent my attendance to any of the intervening matches, but last night, I was there!

I was pretty happy with the first three stages. Then my brain took a vacation on stage 4. Yikes… Completely missed the first target. I had two shots into hard cover. I could have made those up, but I made the (wrong) snap decision to move on. That one cost me 5 seconds for two misses and 5 seconds for a FTN. Then one of the two showing 6 down… one was a 1 down and a miss, 2.5 seconds. The other was two 3 downs, which got me 3 seconds plus another 5 second FTN.

All these were from a simple standing position and with Vickers count rules, I could have shot again to make up every one of these for in FAR less than the 21 or so seconds assessed in penalties just for those issues. The rest of the downs would have been fairly trivial and I could have finished in the middle of the pack instead of almost the bottom. 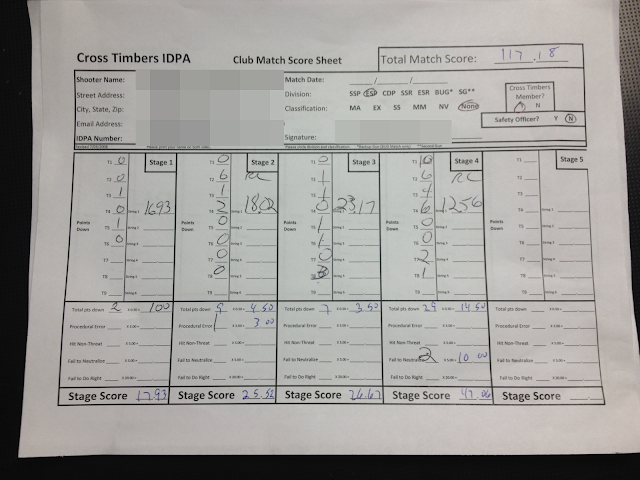 One member offered the advice that I was trying to go too fast. That makes sense to me and intellectually, I know better. Of course, this all means that I just need to practice more and shoot more matches so these kinds of silly things don’t happen.

In the good news side, the Lone Wolf 40S&W conversion barrel in my Glock 20C performed perfectly for 70+ rounds. I had one feed issue at load and make ready (on stage 4, interestingly) but I suspect that was my fault… I probably rode the slide forward a bit instead of cleanly releasing it to chamber that first round.

One issue that I have ordered a cheap part to address is that I had trouble finding the magazine release. Probably because I was in too big of a hurry, but still….

[this just in… there was a tiny arithmetic error in the score sheet on stage 4. All the penalties are still as is, but they add up to only 37.06 seconds. That moved me up one notch in the standings on the final scores, but changes nothing in the analysis. I still need practice practice practice.]