I ordered a Lone Wolf 10mm to 40S&W conversion barrel for my Glock 20C. I missed the bit about how some Glockstore products are not in stock and may take longer to arrive. The barrel turned out to be drop shipped directly from Lone Wolf Distributing. I had paid $31 extra for 2nd day shipping and the only part I was actually in a hurry for arrived 11 days later. Glockstore was super nice about it and refunded a significant part of this shipping even before the barrel arrived. I was disappointed with the barrel taking so long to arrive, but I certainly can’t fault them on service, especially when I had missed the pretty clear notice on the page.

I installed all the rest of the parts while waiting for the barrel. I now have an extended slide release, extend slide lock and a 3.5 pound trigger connector. These were all very simple to install. 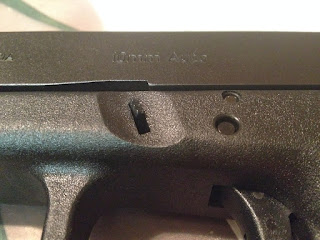 It’s surprising how much easier the pistol is to field strip with the extended slide lock. It seems to be a problem I didn’t know the platform had 🙂 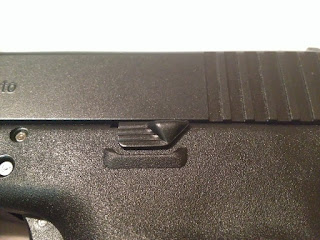 I have always thought the stock slide release was a little difficult to operate. I am trying to train myself to pull back on the slide to release the slide after a reload, which is arguably faster, but having the extended release will help in those situations where the off hand is not immediately available.

Before I installed the 3.5# connector, I used my semi-fancy trigger pull scale to get an average on the “before” trigger pull. The hook on the scale did not want to sit where it would properly engage the trigger safety. I ended up hooking the trigger at a low angle to press the safety, then once partial pressure was on the trigger, I moved the scale so that it was pulling correctly. Even so, a couple of readings were suspciously high, so I threw them out of the average. The “final” before average trigger pull was about 7 pounds, measured in this way. After the connector was installed, the trigger definitely felt better, but measured out at about 4.5 pounds, using the same technique. Next time, I will use a bit of tape to engage the trigger safey then pull the scale in a more consistent manner.

Once the barrel arrived, it was essentially an instant drop in installation, especially with the extended slide lock. 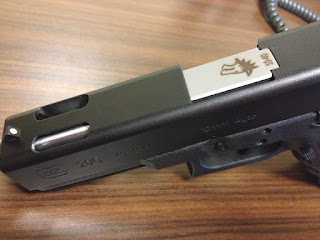 My only concern at all is that this conversion uses the stock G20 10mm magazines loaded with 40S&W cartridges. Apparently, the G20 and G22 are different enough that magazines can’t be interchanged. All indications are that it is a reliable combination, but lets just say that until at least several hundred trouble free rounds have been run through it, when the G20C is at my bedside, it will have the stock 10mm barrel and ammo in it.

In any case, now I have an IDPA legal Glock 20C, for the ESP division. I think the first opportunity to shoot it in a match will be the first week of December.

About all that’s left on this pistol is to replace the sights.

Most visibly, I added a Wilson Combat drop-in beavertail safety, Commander-style hammer and a mainspring housing with a magwell funnel attached. 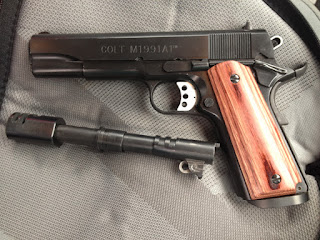 Just ignore that comp barrel for now. It happened to be in the gun rug when I took that pic 🙂

You may recall from a previous post that I accidentally ordered the wrong beavertail. Once it didn’t fit, I dug into it and finally saw that I had ordered the beavertail for a Commander. It was a simple matter to order a replacement. In the interest of fast shipping, I chose not to pursue an exchange/refund for the wrong part at that time, but I may look into it now.

Once I had the right part, fitting the drop-in beavertail took a little more than expected. Due to my own oversight, I ended up trimming the engaging tab too much and was able to correct it by filing both the bottom of the safety and the top of the mainspring housing where they meet. To correct for this correction, I will need to braze/weld a tiny bit on the bottom of the engaging tab and refit better. As it is, the safety works, but it takes only the smallest press of the grip safety to allow it to fire, which meets the letter of the system, but doesn’t really meet the intent. 🙂

Internally, I polished a lot of trigger group parts, pretty much everything that touches each other. Trigger pull is much nicer and down to between 4.5 and 4.75 pounds. The firing pin safety even works.

I have ordered (and had arrive just today) an extended thumb safety and extended slide release. They will hopefully be really drop in pieces.

Assuming those last two bits work, I will work on the fit of the slide. It is perfectly functional, but there is a little bit of metal on metal screech and the recoil spring is a little noisy. Racking the slide slowly sounds a little like opening a screen door. Having fondled a reeeeeally nicely fitted 1911, I’d like to pursue more of that, at least part way down the rabbit hole.

That and some nicer sights and I think I’ll be done with parts on it. It will then be ready for a new finish, probably Cerakote. It’s unlikely to be zombie green, so you can relax. “Blue Titanium” or “Socom Blue” both seem likely, though.