I haven’t been able to nail down the exact date, but it was sometime in the early 1980’s that I got my first ticket. It was just barely before the Volunteer Examination systems was created, but at that time, a General or higher could administer the Novice test. The club in San Angelo, TX held a class. I recall three of us, Mark, lifelong friend KD and me. We got KA5RZZ, KA5SAC and KA5RZY, respectively.

Mark has kept his callsign though all the years, currently Advanced class.

KD kept his through Advanced, then got NN5KS as a vanity call once he got to Amateur Extra.

Once VE testing was in full swing, I was living in Abilene, TX, and in 1989, I took a club-offered Technician class and subsequent VE testing. I passed and got callsign N5HRK.

I was fairly active for a few years, notably with then new-and-exciting packet radio on 2 meters, and a little HF. There was no Novice/Technician phone on HF at the time, so it was all CW, all the time. As I never was particularly good at Morse code, it was not something I really excelled at and so I found it to be somewhat frustrating. That, and antennas on an extreme budget in rented housing can be a significant challenge.

So, I chilled somewhat on the hobby, doing other things over the years. I moved to Fort Worth, working primarily in voice communications, primarily telephone systems. Hobbywise, I did a lot of robotics. I never completely forgot about radio, though it was not front of mind. Expiration of my license in 1999 came and went and then some.

I got interested again in 2010, due largely to KD. My license was long expired and even the 2 year renewal grace period had expired some 10 years earlier. In the good news column, however, the requirement to show proficiency in Morse code had been eliminated. This meant that studying would be all technology, rules and operating. I had originally planned to study for General class, but along the way decided that I would push for Extra

I used a lot of online study tools and eventually I started using online practice tests that presented questions from the pool of questions for all three classes. Once I was studying the Extra class questions, I had refined a process wherein I would get the question and if I did not know the answer immediately, I would research the question to understand the subject rather than simply look up the answer to that question. I think that gave me a much better understanding of the actual material, which I think is the actual intent of testing licensees.

So, I found a testing session and in March of 2011, took all three tests in one sitting. I aced Technician, did well on General and squeaked by on Extra, but I passed! I got callsign AE5XB.

So, with my fresh license, I decided that I was going to run a 1E station for ARRL Field Day. I had a Kenwood TS-450SAT, but I needed an antenna. I knew that a monoband dipole would be too limiting and that with a small property, a standard 50 x 100 foot lot in an older part of town, I needed something compact. I elected to make an off center fed multiband dipole using a commercial balun. 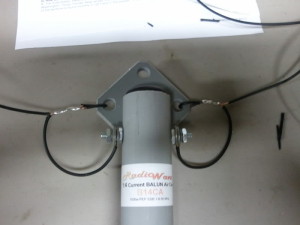 My experience with it was not totally positive, but I am reasonably sure that the design, construction and height above the ground would all have been issues.

I found that I could hear a lot of stations that could apparently never hear me. When someone did hear me, they had trouble copying my callsign. Cool as it looked, I decided I would get a vanity callsign.

I looked at a couple of other possibilities, like my initials, etc, but what looked best was my still-available former call, N5HRK.

By Field Day 2012, I had the new call and we had moved to our house in the country on almost 12 acres. Even with the available space, I still wanted to have a compact antenna, largely for aesthetic reasons. I decided to put up a strong multiband vertical. With the vertical in place, FD2012 was good for 109 QSOs and 488 points and we didn’t even work the whole 24 hours.

The antenna installation deserves it’s own story and I’ll put that in the next posting.

I have been a ham for most of my adult life, though I did let my license expire in there somewhere. I have blogged about shooting and trikes and a little on home automation, but somehow, I didn’t blog things ham. I’m here to fix that.